Day in the Life: Raising Awareness Around Precision Medicine

With a passion for education, advocacy, and awareness, Henry was drawn to the role of Medical Science Liaison (MSL) at Foundation Medicine. He got his start with a PhD in integrative biosciences from Tuskegee University in Alabama, followed by a post-doctoral fellowship at Vanderbilt University Medical Center, in the lab of Dr. Christine Lovly. It was working in her lab that he was first introduced to the company and a career as an MSL at Foundation Medicine, a pioneer in molecular profiling for cancer.

Upon the conclusion of his fellowship, the transition from academia to industry had Henry grappling with the question of how he could give back to his community. He not only wanted to find a way to thank the people who helped him reach his goals, but also wanted to inspire the people around him to pursue similar careers in medicine. 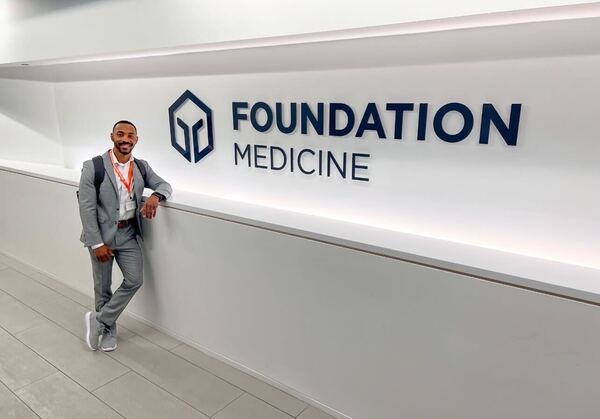 Henry co-founded his organization, Black in Cancer, with a friend “almost by mistake.” It wasn’t something that the two planned on creating – they just wanted to bring together like-minded individuals in their community. Now, Black in Cancer is a thriving organization that aims to increase representation within cancer research and medicine through mentorship, education, advocacy, and awareness. They recently partnered with Cancer Research UK (CRUK) to host their Black in Cancer Conference, empowering the next generation, in London.

Henry’s experiences with Black in Cancer directly translate into the way he works as an MSL at Foundation Medicine. One of the most important skills he brings with him is the way that he communicates. “As scientists, we talk about complex things all day with each other, and can easily understand one another. But when I am talking to anyone else, I need to be mindful that I don’t use scientific jargon. In order to break things down, I try to ensure that I am explaining the science at a level that anyone in my family, including my ten-year-old nephews, could understand.”

In addition to communication, the experience that Henry has gained as a leader in Black in Cancer has helped him in his interactions with  cancer care teams, including oncologists, pathologists and nurses, as he offers guidance and support as an MSL. These skills, combined with his passion for the field, have helped him to become a powerful force in advancing the impact of comprehensive genomic profiling. 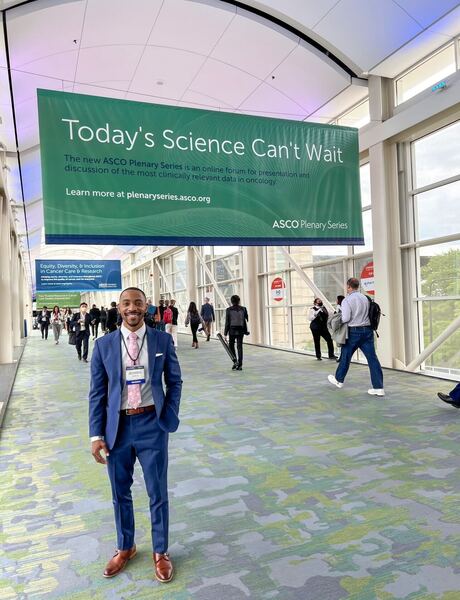 In Henry’s role, he is often doing the same kind of things during the day that he does off the clock with Black in Cancer – educating and inspiring doctors and future doctors about the power of precision cancer care.

“During my recent travels as an MSL, I gave a talk to medical fellows and got to provide them with more information on cancer genomics,” he recalled. “Seeing the gratification from the fellows as they got to learn more about this complex topic was incredibly rewarding. Knowing that I am better informing the people who are directly working with cancer patients is a highlight of the job.”

October is Breast Cancer Awareness month, and for Henry, this means an important opportunity for education and advocacy. “I think most people don’t understand what they want to do in their career, even if they’re already doing it,” he said. “Having awareness months can spark students’ interest, especially when it comes to cancer research, in areas they never knew about. Cancer is so heterogeneous, and differences in cancer open a variety of avenues for research and medical professions. These months not only shed light for patients, but also for physicians and future scientists, who may not know what they want to do, but are open to these conversations about what the future could hold.”

Of course, cancer awareness months also offer a great starting point for conversations with patients, caregivers and providers. “These months introduce important opportunities to have hard conversations,” Henry explained. “When it comes to breast cancer awareness month, this is particularly important, especially because Black women often have worse outcomes. Nobody wants to talk about that – nobody wants to talk about death, or a cancer diagnosis. But once you do, you can figure out more about the disease, like what is it? And why is it affecting my family member?”

Henry says that these conversations during awareness months have the possibility to turn into tangible action. “Sometimes it opens doors for people to get tested, which in turn brings about avenues for early detection and chances to ask the right questions of our doctors. Especially when it comes to Breast Cancer Awareness, I think it’s all about making people comfortable with the idea of asking what uncomfortable questions, including about mammograms, family history, and how the disease affects certain populations.”

“Conversations about race and cancer in particular are difficult to have,” he continued. “But they are so needed, because there will be no progress without talking about it. Foundation Medicine is opening doors to partner with organizations in these areas, and in turn, more people will have the chance to be introduced to comprehensive genomic profiling, especially our underserved populations.”

Henry looks forward to growing in his role at Foundation Medicine and in Black in Cancer, as he continues to educate, empower and drive awareness. Through his passion, he continues to make a difference with patients, providers and students alike, one person at a time.

ctDNA-Research and Early Development 102354 United States United States R&D
About the Job The Senior Biostatistician is responsible for providing statistical and machine learning expertise for the development and validation of next generation sequencing assays that enable personalized medicine. This role requires creati...