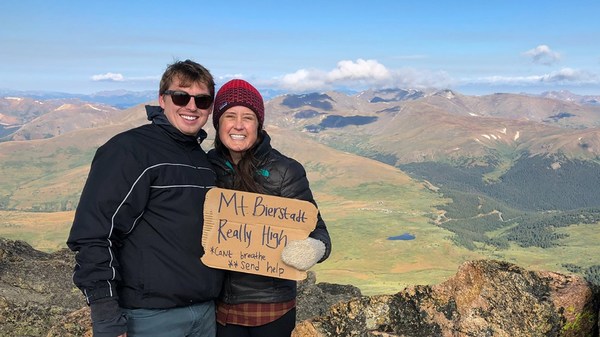 In 2014, Corey, a recent college graduate and avid runner, was diagnosed with Stage 4 lung cancer. Earlier this year, Corey joined Foundation Medicine (FMI) as a Patient Services Specialist, based in Colorado. She hopes to continue helping patients through her work, by sharing her inspiring story, and by helping FMI expand our Patient Network.

Read more about Corey’s experience below in our recent conversation with her.

When did you first hear about your lung cancer diagnosis?

I was diagnosed in the spring of 2014, roughly two weeks after graduating from the University of California. I did not have standard symptoms. I was a pretty avid runner and didn’t feel anything in my lungs or in my bones. The only sign I had was this little flash in my right eye that I asked my optometrist about. I later learned that because my optometrist thought it was a sufficient bump behind my eye, he pushed me to go see an eye tumor specialist. Fast forward a bit and that same doctor encouraged me to have a full body scan, which lit up like a Christmas tree. I had a needle biopsy and got the devastating and very shocking diagnosis of Stage 4 lung cancer.

What was your treatment plan and experience?

In late 2014, I moved back home with my parents in Southern California. In my own research during this time, I rwas introduced to the concept of targeted therapies. Little did I know that my doctor had already submitted my needle biopsy for I didn’t find out about FMI’s offerings until much later in my treatment. I talked to my doctor about getting tested and he submitted my sample for a standard hotspot test of the EGFR gene and a few others. The EGFR test came back negative, which was a blow. However, the results also said there was not enough tissue for a very decisive negative or positive. At this point, my doctor at St. Joseph Hospital in Orange, California scheduled surgery to remove more tissue and ordered the FoundationOne test. The results of my FoundationOne test indicated that I’m ROS1 positive. I knew it was either really bad news or good news when my doctor called instead of the nurse. He said, “You’re ROS1 positive, I think this is really good.” He suggested Xalkori® (crizotinib) for treatment, which had just been approved for lung cancer, so I started that pretty quickly. I didn’t have to jump into chemotherapy or any type of infusion--I just started with the Xalkori® pill twice a day. That worked really quickly with very few side effects. I had clear scans within a couple of months, which was a great feeling.

Have there been shifts in your treatment plan since that time?

In May 2015, we did a brain MRI and learned the hard way that Xalkori® does not get into the brain. They found brain lesions, which was a big setback. We had to make the decision to look at new targeted therapies that did get into the brain and targeted ROS1, or adding radiation on top of my Xalkori® treatment. Ultimately, I decided to enter into a clinical trial for a new targeted therapy called ROZLYTREK™ (entrectinib). While I didn’t have dramatic results, I did have long-term results. Entrectinib kept me stable for over 3 years, during which time I moved to Colorado and got a job. It had felt like my life was on pause living at home with my parents and I was ready to make a move. My sister lives in Colorado, so I’m grateful to be near to her. I’m also lucky to see my doctor at University of Colorado, who is a very smart guy. In the spring of 2018, he told me that he saw some growth in the tumors, and we’d have to make a change in my treatment. At first, we experimented with a drug called Alunbrig® (brigatinib)—that did not go well and was very scary. We then tried LORBRENA® (lorlatinib) which went very well and had dramatically positive results. I recently had a scan which showed a clear brain MRI. My lungs and bones look good, too. We’re on the good part of the rollercoaster right now. I’m also doing chemotherapy infusion drugs to help with the bones. He thinks the ROS1 mutation in the bones might be different than elsewhere in the body and therefore is not responding to lorlatinib.

What is your history with FMI?

In 2014, I gave several talks to the folks at FMI about my cancer treatment experience, and in 2015, I was pleased to join the FMI holiday party. I realized that it was a really fun group of people, but also that everyone was extremely hard working. I became friends with more people at FMI as the years went by. One of those friends, an Account Executive on the Sales Team in Florida, pushed me to apply for a role at FMI. I was nervous about applying for anything because it seemed like all roles were based in Cambridge. I spoke to friends in Talent Acquisition, who encouraged me to apply for anything that I could do from Colorado. In March of 2019, I joined the Client Services Team as a Patient Services Specialist. Currently, I work in the call center, speaking to doctors, pathologists, and patients, and later this year, we’re hoping the role can become even more patient-focused. It’s a really good experience and I’m excited to be able to share my story with more patients.

How are you helping other patients?

It took a long time into my journey before I realized there was a difference between my first hotspot test and comprehensive genomic profiling. Knowing the difference between the available tests is so important, but it’s also so complicated. I don’t think I would have pushed after the first test for further testing. While it is important to trust your doctors, I learned how important it is to be informed and advocate for yourself.  When I was first diagnosed, I was desperate for stories. I scoured the internet for any kind of hope. I need and want to do more to help the patient community because I know how helpful it can be for others. Based on my experiences, I’m excited to work with the Patient and Professional Partnerships Team to help FMI expand our Patient Network and share my story of hope.

Biopharma 102378 Germany Germany Biopharma
About the Job The Senior Manager, Business Development - EMEA is responsible for developing and executing upon a comprehensive strategy in account acquisition, management and growth for FMI’s pharmaceutical and biotechnology partners and prospe...